Looking for good cholesterol levels along with weight loss and other health benefits?

Ever wondered how to lower cholesterol naturally?

Smaller portions are apparently one way to do it without giving up high fat foods.

Eating a low fat diet is not as important a factor as you (and your physician) might believe. Once again, the latest scientific research suggests that fat content is not what determines a healthy diet. Instead, we should all take a look at portion-size.

According to researchers, a diet with up to 45% of calories from fat can still support good cholesterol levels, weight loss, and healthy levels of inflammation and oxidative stress.

The key to maintaining healthy biomarkers is a complicated interplay of fat content versus total calorie intake.

The days of religiously checking every label for fat content and buying only low fat foods in order to achieve good cholesterol levels could be over.

In a recent study Calorie Restriction with a High-Fat Diet Effectively Attenuated Inflammatory Response and Oxidative Stress – Related Markers in Obese Tissues of the High Diet Fed Rats, researchers set out to determine if simply cutting calories could bring their obese, high-fat-diet group back to the low-fat-control group’s health level. 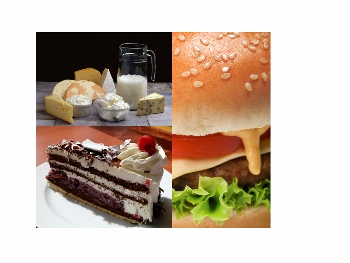 What the Researchers Did:

Participants in both high fat groups became obese over 12 weeks of this eating plan, but not the low fat group.

At the end of the 12 weeks, one of the two experimental high fat diet groups was put on a calorie restriction diet for nine weeks. They still ate the same percentage of high fat food, but portion sizes were reduced to only 60% of what the other high fat group was eating. They stayed on these regimens for 9 weeks.

Scientists watched each group during those 9 weeks, looking for changes in weight, cholesterol levels, and markers for inflammation and oxidative stress.

Can you Lose Weight Naturally on a High Fat Diet?

During the 12 weeks of eating an unlimited high fat diet both test groups ate more calories and gained 19.74% more weight than the low fat control group.

Interestingly, all of the animals were given unlimited food during the first 12 weeks. The low fat control group ate a larger volume of food than animals on a high fat diet. However, because fat is more energy-dense, the high fat groups ate significantly more calories.

During the next 9 weeks, participants eating a diet with fewer calories, but still high in fat lost all of the weight gained in the previous 12 weeks… and more!

That means that the overall weight of the reduced calorie but high fat diet group was significantly lower than the low fat-fed group by the end of the study!

This result makes sense when you consider the test group ate 1/3 fewer calories than the low fat control group.

What do these results tell us? Calorie reduction is one way to lose weight, independent of the fat content of the diet.

Can you Have Good Cholesterol Levels
on a High Fat Diet?

We can therefore assume from this study that total calories consumed have a much larger impact on triglyceride levels than fat consumption.

If you’re wondering whether this is a freak example, or too good to be true, let me say that this pattern of results is consistent with previous studies.

Clearly, the secret for how to lower cholesterol naturally is more complicated than simply following a low fat diet.

Total calories are important, too.

This study suggests that the best diets for maintaining good cholesterol levels will emphasize portion control, rather than focusing exclusively on the types of foods eaten.

Find out more about how to lower cholesterol naturally.

What About Dietary Fat and
Inflammation and Oxidative Stress?

We don’t normally think of our body fat doing much other than making us look more or less attractive, but it is a vital component of our body’s inflammation response. Inflammation, oxidative stress, and high blood sugar often go hand-in-hand with obesity, and other symptoms of ill-health.

Inflammation involves a lot of different proteins. Researchers can test tissues to see what the levels of these proteins are. More markers of inflammation indicate more potential damage to tissues, and more work for the body to overcome.

As we would expect since these markers are tightly correlated with obesity, they all increased as animals gained weight during the first twelve weeks. Interestingly, these effects were not permanent, and many reversed with a calorie restricted diet, regardless of fat content.

In fact, most of the markers tested were comparable between the reduced calorie high fat group and the low fat group. In contrast, the group that maintained a high fat diet had higher levels, indicating a greater risk for inflammation and damage from oxidative stress.

This research joins other studies in suggesting that low fat diets are not crucial for health benefits.

For this study, the reduced calorie, high fat group cut their calorie intake by 60%, while maintaining 45% of their calories from fat.

One issue with this study is that no information about the high and low fat diets was given other than the percentage of calories from fat. We do not know exactly what the fat source was or what types of fats were in the diet.

We have no way of knowing if they ate a diet rich in omega-3 fatty acids, which research supports as having some health benefits, or what the combination of trans fats, unsaturated and saturated fats is.

Find out more about fats.

Find out more about omega-3's and fish oil.

In addition, these animals were restricted to fairly small cages so that their activity was minimal. Exercise changes the body’s processing of calories; and specifically the metabolism of carbohydrates, proteins and fats changes with energy expenditure. Therefore, these results may look different in a more active population.

In the end, if you’re looking for how to maintain good cholesterol levels, a healthy way to lose weight, and ideas to generally improve markers of good health; then perhaps it is time to stop vilifying fat.

Go to the Science of Natural Health Homepage.